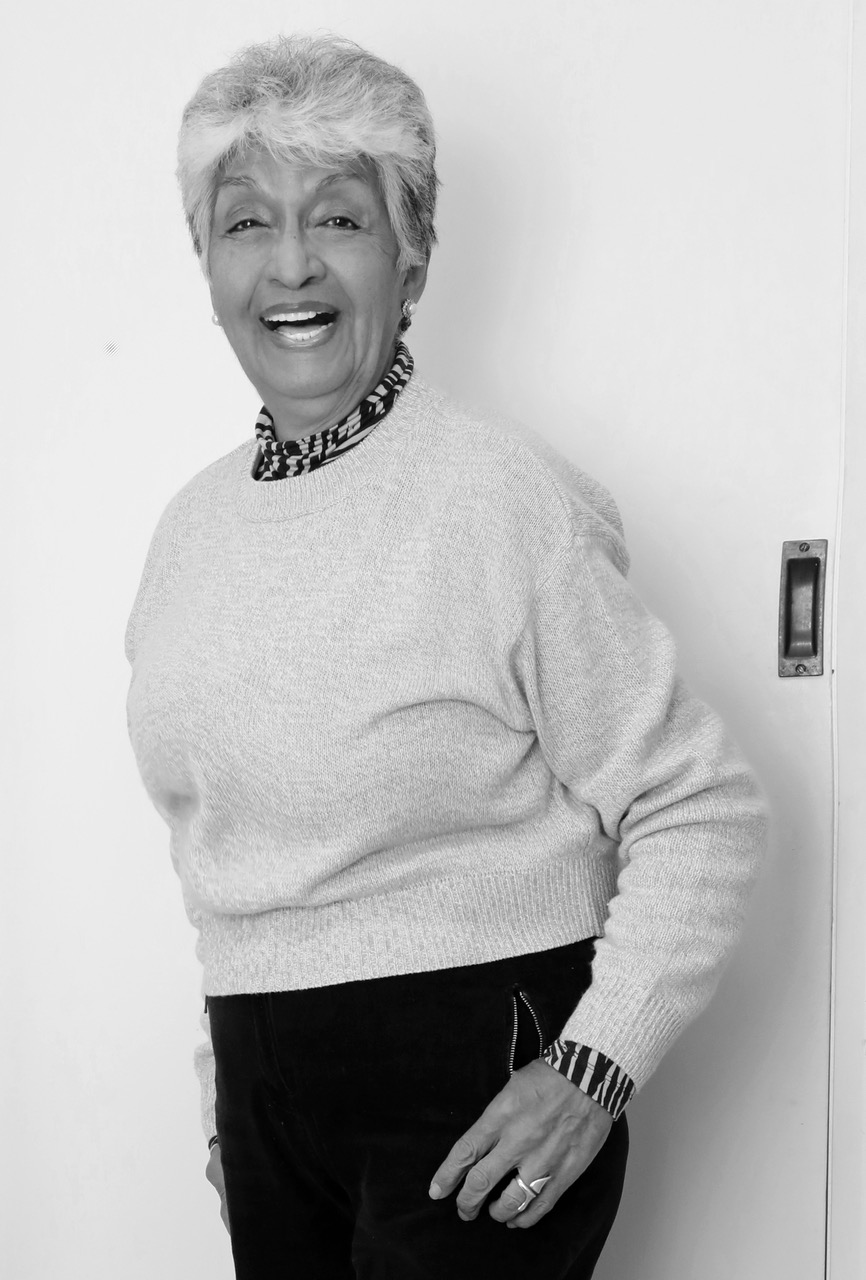 “When I grew up and left home, I married a man called Alberto, and we had three sons, Sebastian, Maximilian and Alfredo. My husband was aggressive, violent, choking me, abusing me financially and psychologically. Oh, I know about domestic violence. It was a very difficult time for me because I was the one who had to do everything for the children, who had to be the busy bee all the time. Eventually I said to him, ‘Enough is enough, Alberto!’ I left him and bought a three bedroom flat, in Mendoza, in Argentina and tried to work while having my sons with me but I just couldn’t do it, I couldn’t pay the mortgage. It was very upsetting. In Argentina, at that time, there was inflation and recession, no jobs, no future. So I made the decision to sell the house to pay for a ticket to Australia. When I was younger, in ’66, I had been to Australia before on a student exchange program. This time, though, I intended to stay and I did. I have never gone back.

It was 1985 when I was 42, came to Australia on a tourist visa. My parents had already passed away and I left my sons behind with my husband. I hadn’t been able to give my sons the education that I had, not that I have a university degree but I like to read a lot and educate myself. It was very hard to leave my children behind. It was absolutely heart breaking. I knew my children would miss me and would be living in poverty with their father but I always prayed for them and I always sent money to them. When I arrived in Australia I first went to the Seventh Day Adventist Church for a job as a cleaner, as in Argentina, I was raised in this church. But they turned their back on me and wouldn’t help me. So I found myself with no money and practically homeless. But the Lord never leaves me alone, and always I manage to find someone to help. I made contact with Spanish people at the Spanish club in Liverpool Street in the city and they gave me an address in Kings Cross and told me to go there and do cleaning jobs. They said it was an easy place to live with cheap accommodation. So I went up to Kings Cross and I lived in a backpacker hostel for nine months and the young boys there, they helped me and corrected my English because my English wasn’t good enough. And I earned enough money working as a domestic, cleaning rooms in a hotel there to send home to my children. It all depends what you’ve got in your heart, if you go for the right sort of job there’s a lot of work. When I’d come out of the hotel I’d go and work in an Italian restaurant washing pots and pans or on other days I’d go into the city and clean offices. I was very busy!It might seem hard to be living in Kings Cross and not speaking English well while trying to get permanent residency but I always kept in regular contact with the Immigration Department and I was always honest with them, I never ever told a lie. And it wasn’t a problem filling in forms because I always found someone next to me to help. I’d say,  ‘Please, would you like to help me fill in this one?’ I’ve never been ashamed to ask for help. You might wonder why, living in the Cross, I was never tempted to take the easy way, the wrong way. I’ve never got involved with drugs or with bad people and that’s because I regard my body as the temple of the Holy Spirit. A temple is sacred, it is pure, and the temple is inside of us, in the mind. I don’t follow any one religion or sect or philosophy but I have my Holy Bible, or as we say in Spanish, Santa Biblia, and I believe in what it says in Joshua Chapter 1 Verse 9: ‘Be strong and courageous. Do not be afraid; do not be discouraged, for the Lord your God will be with you wherever you go.’ That is holy to me. I’ve never been tempted to go the wrong way.

I prefer to work hard. So that is how I managed living and working at the Cross but after nine months there I left the backpackers and went to live in a house in Burwood, The owner, a Greek, was renting out individual rooms. I met a lot of Italian people with whom I could have better communication and it was a better life there, cleaner, with more privacy. Honestly, I was sick of the ugly lifestyle in Kings Cross, the drugs, the prostitution, and the police arresting people with drug addictions or who were living on the street. I stayed at that place in Burwood for two years and from there I was able to move to a private rental in St Clair with three bedrooms, a lovely garden, a swimming pool and air conditioning. My intention was to bring my kids over and when they arrived I would already have this house with furniture, books and toys for them, everything they would need. I even went to the Community Centre and explained to the social worker what I wanted to do and asked her to give me ideas on how to fix up the rooms. It was wonderful. I had a whole house for me. I could leave the doors and windows open. It was close to St Marys, close to the school. It was close to the shopping centre and the community centre with a big park in front of the house where people played sport. Rent and bills were very low then and I could easily pay for it.

It was 1990 and by then I had lived and worked in Australia for the last five years and become a temporary resident and now finally I had a lovely home and was working for a catering business called ‘Cooking For You’. So I bought tickets for my children and they came out to live with me in Australia. At the same time I also became a permanent resident. By then I had divorced my husband but he didn’t stop the children coming out because he felt so guilty for his past behaviour. At the time they arrived, Sebastian was eighteen, Maximilian was twelve or thirteen and Alfredo was eight. In all that time I had worked mostly as a domestic, but then I began to look at getting better qualifications, to get a better life. So I went to TAFE for further study in English and also did computer studies and first aid. With this I was able to start working in a nursing home, washing and cleaning the elderly residents, and cleaning their rooms. It was a tough job and I didn’t like it because of the racism I experienced there. So I decided to go back again to TAFE and learn how to prepare meals, how to present a table and how to introduce myself and to learn telephone technique. Then I begin to work as a waitress with an agency. I worked at various functions and festivals including the Italian Food Festival in Norton Street. That was a hard job as I used to have to start at four o’clock in the morning and sometimes I did not make a profit, only covering my costs. I remember once I had to do a party for some bikies and I was scared, they looked so big and scary. But they were fantastic people; they were so nice to me. I could not believe it! . They were very happy with me. They were coming into me and saying ‘Good food, Very good food.’

During all this time I had been renting lovely homes to live in with my three boys – one was even an executive home with seven bedrooms, a swimming pool and a garage. My boys, they were pampered! They said, ‘Mama, you are a superwoman, I love you, I would never forget you, I will never leave you!’ Yet, they did leave me. Sebastian was the first one to leave, when he was twenty-five. Maximiliano was the second one to go and when he left I said, ‘What can I do now?’ This was a difficult time for me because of the lease I was on; I needed some other way to cover the rent. So I went to the University of Western Sydney with photos of my home and I applied for students for home stay accommodation. I got young people from Japan, the Philippines, the Middle East and from Norway. They liked my large house, especially the Japanese because they had come from very tiny homes. But as I was without any money at all I also went to the local Community Centre and I found another Argentinian there, a doctor, and he said, ‘What are you doing here?’ and I said, ‘I need a job.’ They put me on a program for people looking for work and that was just when Star Casino opened, in 1997, so I applied for a job as a waitress there. I worked at the Casino for approximately seventeen years. I retired from there, when I was in my sixties.  When I retired I said, ‘Oh my God now what can I do?’ You see, I still felt strong and energetic, so I put an advertisement in the newspaper: ‘A mature Spanish woman to clean your house’ and I got work at beautiful family homes with beautiful people. I’m still in contact with some of them. They trusted me to take their children to school and back; I was practically their housekeeper. Unbelievable! So many memories!I’ve always worked, always worked honestly but now if I do any work like that I get very exhausted. If I work too long at anything I get pins and needles and I have to stop and massage my hands. But I really enjoy working in the garden. I’m so happy out there with the worms and the little insects, the ants. I would say my strength to do all these things I have done did not come from my family.  I think I was born fragile but it was the circumstances of my life that have made me strong. Forgiveness and love, they have been my weapons and my strength. Whatever has happened in my life, I’ve planned ahead to do what I wanted to do and I have always had Faith. Even now that I’m retired I pray and meditate and burn a candle and two years ago I even went to India to meditate.”  – Carmen

“As for any advice I would give to a young woman who was in my situation today, a woman who got off the plane after leaving her family behind, I would say, ‘Be strong, have faith, love yourself. If you love yourself, everything will change around you. If you love yourself, other people will respect you. Love is like an invisible barrier; it protects you. That is very important – to love yourself because love is not on the outside, love is in here, inside, in your heart.” – Carmen